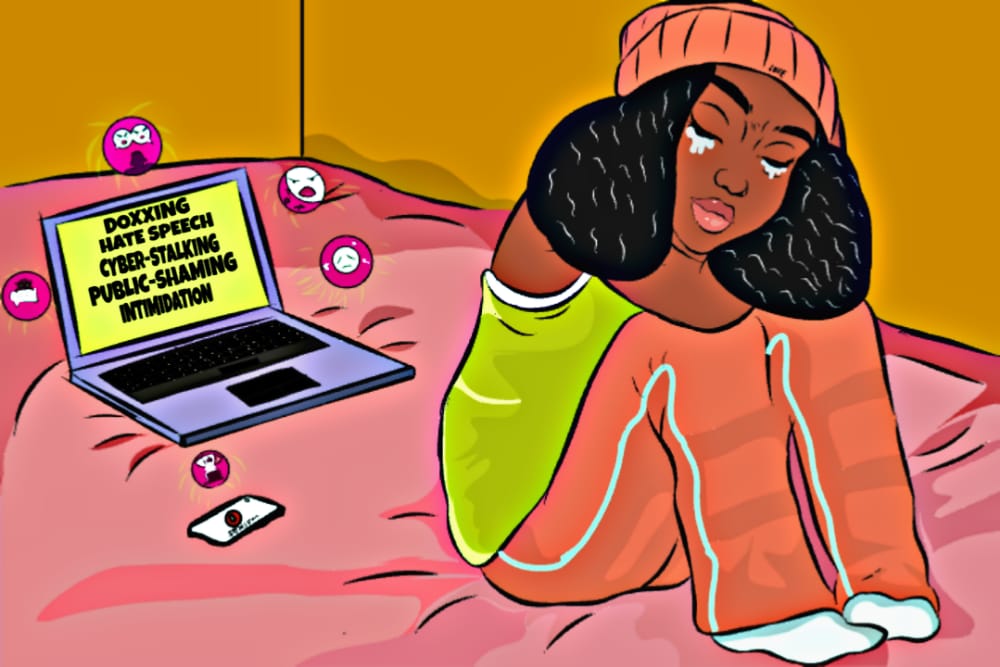 Online Violence. Victim Tells it all

My sister called me and went like, you what have you done on Facebook?”  Not suspecting anything unusual, I answered casually with a chuckle, “Now what? I told you to stop stalking me online.”

When I post something on social media, my sister will call or text me about it. It’s never anything serious, just things a family member would notice, like when you get a new hairstyle, when you post old family photos or when she thinks I am being cheeky.  It is always the start of a long conversation.

This one did not seem like the start of a conversation. She had called specifically about what was happening on my Facebook page. She went on to ask, “do you ever go back to check the comments people put on your photos?” “Yes, I do”, I answered. “It’s just that I’ve not been very active in the last few days.” (It’s true, some days I’m really active on social media and go through posts, reply to comments, reply fan mail and all. Some days, I’m away for days on end. I could put up posts the whole week and not get time to go back and engage. Bad habit. I know. )

She sighed! “You need to go back there and see what’s happening. Someone has sent me a screenshot from comments on one of your photos and I think there’s a group of people who are complaining about something and abusing you in the process. You may need to reply to them to clear your name or do another post and explain.

This gave me a hint of what the issue was.

“Ignore, social media people will always say things,”  I answered dismissively.  “If someone is genuinely interested in an issue, they will find a way to reach me. Anyway, I’ll check my inbox.”

“That’s ok but I think this has gone too far, you have to do something”,  she insisted. We ended the call. I didn’t do as she had suggested. I got busy with other things. Maybe I forgot. Maybe I brushed it off. Maybe my phone was low on charge, maybe I just was not in the mood for pressure and negativity. I like to keep negativity as far from me as possible.

Two days later , I still had not gone back to my Facebook page to check on the comments as she had suggested.I’m a procrastinator. Worse if I know the issue at hand will upset me.  So two days later I meet my brother and as we say goodbye, he goes like, “ be careful what people tell you on Facebook. Some of those comments are really mean and personal.  Probably someone is trying to get information from you using your fans. Be careful. ”  Kwani you’re on Facebook? I was surprised. “ Kwani I’m not fit to be there? “ He chuckles. My brother is not the type to notice or worry about what people say about me, his little sister. He really doesn’t care what the whole world says about any of his family members. He’s those fierce defenders of blood. His mentioning this social media story made me reconsider. It must be serious. I made a mental note to check it out. I went home, fell asleep, and again never checked the comments on my Facebook.

The next morning, in the studio on the morning show, I decided to open my Facebook page. I randomly clicked the comments on a photo.

The first comment that my eyes landed on,  ‘You are the real example of wasted sperm. ….” It gets uglier. Next comment, ‘you are cursed and evil. Shetani’. I go back and confirm that this is my page and this is a photo I posted.

At this point, I am breaking down. The comments go on and on. It’s like a well-choreographed dance routine. Each person is making their move.  Any person who writes anything sensible is attacked, called names, insulted. I don’t know how long I stay on this post which has close to 3000 comments. I just keep going and going. Probably because I can’t believe what people have written about me or probably because I need to know all these. A colleague walks into the studio and I don’t notice until she asks me to move as she needs to use the computer I’m on. I missed her Good morning.  After she’s done with the morning bulletin she asks what I was checking so intensely on Facebook.

” I didn’t know people have insulted me this much on Facebook. “

“Oh, you didn’t?  This has been going on for almost a week now. Ignore them.”

“No, I can’t ignore, I have to write something. Some of these comments are absurd.”

“Let it go. It’s nothing serious. You don’t even know those people in person. They don’t know you.  Ignore.”

I am feeling bad. Do you know how something heavy keeps moving up and down your throat as your eyes are struggling to keep tears away? That kind of feeling.  Listeners have no business in how I’m feeling; I have a show to do. I pick myself up and continue with the show. I say something about people being more careful with what they post on social media as it could land them in jail. That feels a little better.

I  consider different options. Creating a post to express my frustration on being harassed, deleting my Facebook account,  answering all those comments on my posts, writing a statement on all my posts. I consider so many options. I consider filing a case. Online violence is a criminal offense.

I go back to the same photo whose comments I was reading. I click on the edit button. I have decided to edit the caption and put my ‘statement’.  I start to edit. A voice in me shouts. Ignore. I delete the post altogether and go back to work. I start to talk to myself. “May these people know peace. Whoever abused or insulted them. May they find it in their hearts to forgive them”. In this solemn mood, I say a short prayer.

Let me give some background.  Mid June 2020, the organization I work for issued redundancy notices to some staff members. Let’s just say some staff members were retrenched. I lead a team.  Some of my team members were affected. The media is public.  No need to ask how this information got on social media. When the news landed, some people on social media decided that I have the express powers to hire and fire, and even then I am biased in my actions. They decided that I am a malicious person, that I am not competent to make such decisions. They were mad that no one (read I)  failed to consult them on such a serious issue. They decided to prosecute me in the public court. They read out my sentence.

How did I feel about being called names on social media? Bad, very bad. Heavy; my heart was so heavy. Confused; I didn’t know what to do. Accused; I was being judged by a jury I do not know.

Should I have handled this differently?  Maybe. I should have had the courage to call out on my abusers. But I didn’t.  I felt so weak inside and I just wanted this whole thing to end. Is it over yet? I don’t know. Will this affect my future engagements on social media? No. I will do the same thing I have done before.   This is not the first incident of violence I have experienced on social media.  The last time I was harassed, it was a video clip I did. It was trending on all social media platforms for two weeks straight. One year later, that clip is still being shared. By the time it was forwarded in a group I am in, the damage was already big. I was dissected and objectified. People made comments in WhatsApp groups and on social media pages. I became a topic of discussion. I was called and emailed and texted to give my side of the story. I said nothing.

Jeridah Adayi is the Brand manager, Radio Citizen, and a broadcast journalist.