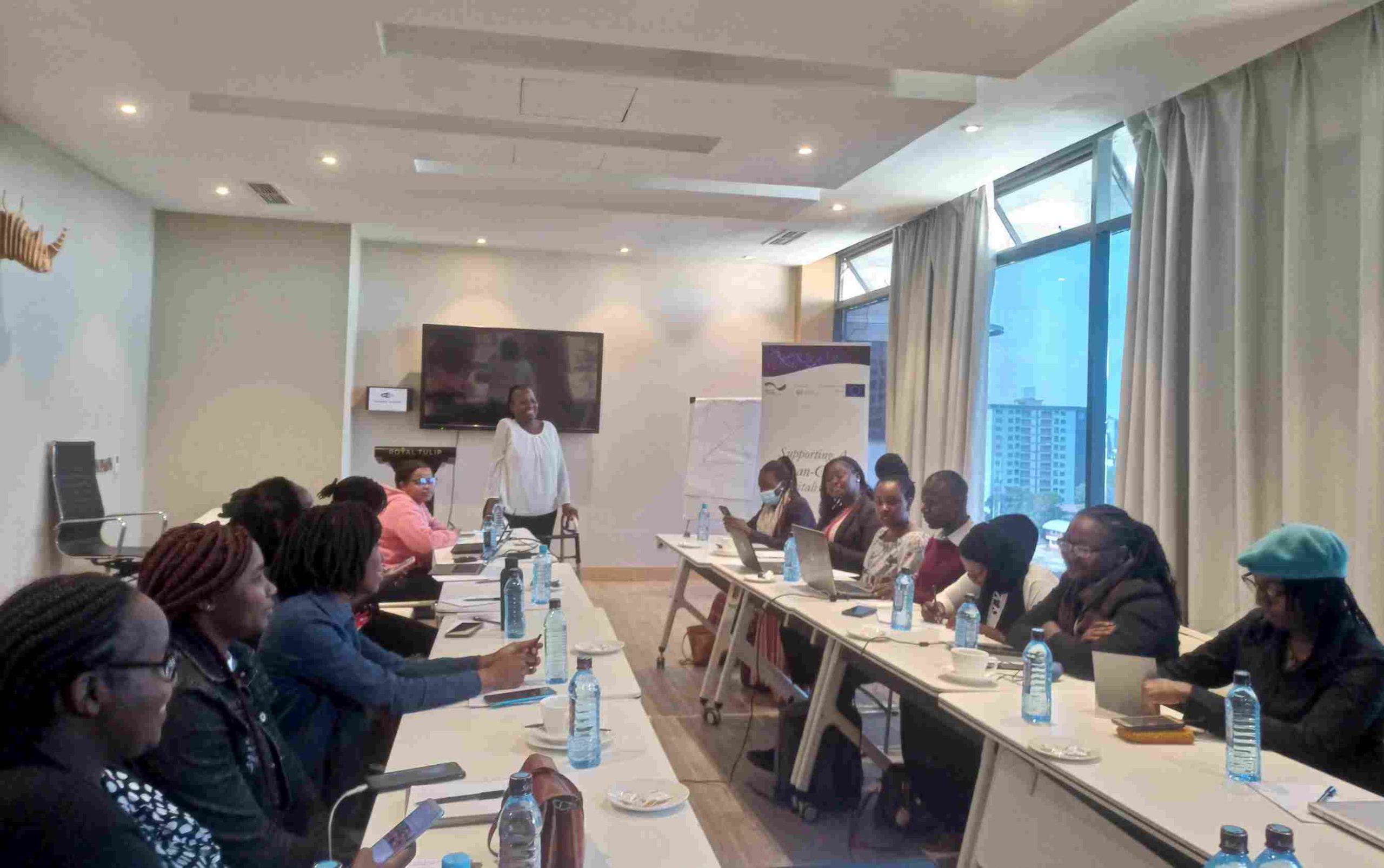 KICTANet is hosting a Training of Trainers on Women’s Data Protection and Privacy from Oct 26- 27. This training workshop is a partnership with the Digital Transformation Centre Kenya, German Agency for International Cooperation (GIZ), and the EU delegation to Kenya.

Gender has not been a focal point of data protection policy discussions. This policy brief launched by KICTANet earlier this year highlights policy gaps in data governance.

Angela Minayo, the Women’s and Minorities Digital Rights Program Officer at KICTANet, convened the meeting. She reminded us that the meeting was a continuation of the digital security training of trainers conducted in June this year.

With support from @DTC_Kenya, @giz_gmbh and @EUinKenya, we are holding a two days Women's Data Protection Training of Trainers of women aged 18-34 years. Follow the hashtag for key highlights #DataPrivacy4Women. Here is a 🧵 why we believe this is important. pic.twitter.com/kVlnz1zEXk

Gender Data Bias, How Women are Missing from Data Sets

The first session began with Cynthia Chepkemoi, Advocate of the High Court and Data Privacy Counsel. Her presentation referenced Invisible Women, which showed how women are systematically ignored in a world built mainly for and by men.

It exposes a gender data gap in our knowledge that is the root of perpetual, systemic discrimination against women and has created a pervasive but invisible bias that profoundly affects women’s lives.

“From government policy and medical research to technology, workplaces, urban planning, and the media, biased data excludes women,” She said.

The Grave Consequences of Excluding Women from Data Sets

It turns out that excluding women as data subjects bears deadly consequences. The workshop learned that most cars are generally 71% less safe for women than men. Manufacturers use male dummies to test for crash impact.

In medicine, when disease research focuses mainly on men as subjects, male symptoms are considered the norm and female symptoms atypical. As a result, women are misdiagnosed 50% more than men and are more likely to be dismissed without treatment.

Ms. Chepkemoi told the trainers that they must fight against this bias because women cannot be excluded in a world where data is everything.

Kenya has several policies that provide for privacy and data protection as digital rights: Kenya’s Constitution guarantees privacy rights under Articles 27, 31 (c), and (d). Kenya also passed the Data Protection Act of 2019, establishing an Office of the Data Protection Commissioner. The computer misuse and cybercrimes Act Sections 26, 27, 29, and 30. Lastly, The African Union convention on Cyber Security and Personal Data Protection (2014).

Mercy King’ori from The Future of Privacy Forum presided over a session on How gender impacts data protection and privacy policies. She explained the situational analysis of data, women, and the legal provisions.

“Most of the time, spaces have been created and not meant to accommodate women,” She said.

Meshack Masibo, KICTANet’s Legal Fellow on Data Protection and Privacy, shared how women can use the criminal justice system to get recourse for data privacy violations against them. For instance, non-consensual pornography.

“Privacy is a civil law issue, but it also has criminal dimensions related to breach of privacy through sharing intimate images. He taught that sharing personal information without the data subject’s consent violates the Data Protection Act 2019,” he taught.

As an advocate for ICTs Access and Equality for PWDs, I raised the issue of how much personal information persons with disabilities should disclose in job interviews.

Should we disclose invisible disabilities to potential employers since declaring, more often than not, opens the possibility of discrimination?

Ms. Cynthia opined that the focus should be on how much one can deliver and not on their incapabilities.

Ms. Judy Okite, Founder at Association for Accessibility and Equality, responded that it is better to disclose the disability to facilitate the accommodations required to do your job.

Ms. Mercy disclosed that The Employment Act as not been expanded to accommodate PWDs, thus putting much pressure on the employer. The focus should be on how we balance data protection and PWDs information.

The workshop is being attended by women from the private sector, civil societies, media, and gender activists.

Ms. Florence Awino is an ICT Access and Equality Fellow for PwDs at KICTANet. She has a background in Environmental Science and Information Technology.