Stolen phone blocking – A short story about CA vs MNOs

Thank Washington for sharing this, I’m highly interested in this topic and
would even love
to do a research around it in order to reduce/stop mobile electronics theft.

Now in theory, some of these “globally unique” numbers, like IMEI, MAC
Address, etc, are said to be
permanent and stored in a read only memory of a device (
en.wikipedia.org/wiki/MAC_address),
however, kwa ground vitu ni totally different… you do a little googling
and boom you land on a 5 mins
video that shows you how to change your IMEI or MAC from the comfort of
your house.

Then you are left to wonder, do we even need the IMEI? Because one of it’s
main functions is:
“GSM <en.wikipedia.org/wiki/GSM> networks use the IMEI number to
identify valid devices, and can stop a stolen phone from accessing the
network.”
en.wikipedia.org/wiki/International_Mobile_Equipment_Identity

So the problem might be beyond our CA and MNOs. A number of questions arise:
1. Who manages these numbers?
2. Is there a policy that requires vendors to write them in their
equipment in a particular way?
3. Can these numbers indeed be globally unique and permanently written on
the hardware?
4. How are MNOs in first world countries dealing with this challenge?

I’d love to hear from anyone that might have an answer to any of those
questions or other ideas
around this discussion. Looking forward to it.

> Once upon a time, when your mobile phone got stolen, you’d report to the
> police who’d issue you with their famous “Police Abstract”.
> You would present that form, together with proof of purchase of your
> mobile phone to your preferred MNO – Safaricom, Kencell, etc who
> would then verify your identity and ownership of the said phone and
> proceed to BLOCK it from being used.
> During those days, the MNOs used to have a central shared database of all
> BLOCKed phones and those phones would be rendered almost
> useless unless unBLOCKed. It was possible to recover your stolen phone
> then – should a buyer of a BLOCKED phone end up at one of the MNOs offices
> to ask
> why “their phone” wasn’t working.
>
> *Las cosas cambiaron.*
>
> These days, when technology has advanced, if your phone gets stolen, the
> MNOs don’t block it.
> The last time I had such an unfortunate incident, Airtel told me that they
> no longer block such phones because when stolen, the thieves go to some
> crooks who
> then write a new set of IMEIs to the phones, which then keep on being used
> by the new owners.
> However, if I needed that form to show that the MNO blocked my phone, I
> can get it 🙁
>
> Now, it seems that crooks beat CA to their game, or who was it who had
> control/supervision and enforcement of this process???
>
> And me here in my naivety was thinking that with the advancement
> of technology and regional integration in EA, the CA of KE, CA of UG, CA of
> TZ, Sudan, Rwanda, Burundi
> would come together and ensure compliance from the regional MNOs, such
> that a phone stolen in EA Region becomes unusable due to the MNOs sharing
> the BLOCKage database.
>
> End of story. Not sure it was short as initially intended.
>
> CA, are you listening?
>
> —
> Best regards,
> Odhiambo WASHINGTON,
> Nairobi,KE
> +254 7 3200 0004/+254 7 2274 3223
> “Oh, the cruft.”, grep ^[^#] 🙂
> _______________________________________________
> kictanet mailing list
> kictanet@lists.kictanet.or.ke
> lists.kictanet.or.ke/mailman/listinfo/kictanet
> Twitter: http://twitter.com/kictanet
> Facebook: www.facebook.com/KICTANet/
>
> Unsubscribe or change your options at
> lists.kictanet.or.ke/mailman/options/kictanet/kelvinkariuki89%40gmail.com
>
> The Kenya ICT Action Network (KICTANet) is a multi-stakeholder platform
> for people and institutions interested and involved in ICT policy and
> regulation. The network aims to act as a catalyst for reform in the ICT
> sector in support of the national aim of ICT enabled growth and development.
>
> KICTANetiquette : Adhere to the same standards of acceptable behaviors
> online that you follow in real life: respect people’s times and bandwidth,
> share knowledge, don’t flame or abuse or personalize, respect privacy, do
> not spam, do not market your wares or qualifications.
> 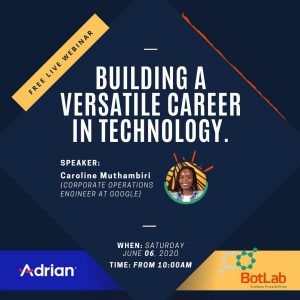 Building a versatile Career in Tech Webinar By Botlab

What is happening? Time to reflect