Thank you for these very good points.

When I was at the iHub, I organised a regular lunch around HealthTech and we got a lot of insight that we would have given to SevenSeas for free, explaining the head winds they were going come into.

The overall concept where the consumers(“consumed”) / working class / serfs / slaves have control on their lives and by extension the fortunes of the 1% is the stuff of Utopia and for UN “talks”. It is not and will not be a reality for all of us.

What these Finland, Estonia, Croatia and Slovakia have in common is an ethic (“national”)  identity. Singapore is similar to Hong Kong in that it was a British Empire outpost that was too different to remain long as a province of Malaysia considering that it was predominantly Ethnic Chinese with the Malay people being about 14% of the population at that time. In fact, Singapore was kicked out of the Malaysia federation and had to become a country on its own.

The other major factor is ideology. You will notice that Brexit is an English tribal conversation in the United Kingdom. The Scots are not for it. Inside England, the different parties are based on ideology of Haves and Have-nots. Thus, their ideologies are based on class and these can be discussed within an ethnic paradigm.

Almost all African countries cannot count these factors as part of their socio-political make up. Most African countries are multi-ethnic political states that have no socio-economic reasons for existence, unlike Singapore as an example.

Kenya is a classic case, like the US of A where an amorphous state of ethnic mixes that are being economically “shaken down” and stratified into economic classes, the Haves and the Have-nots. Kenya has a neo-colonial class of imperial collaborators and the US has a class of global merchants as the Haves.

What we need to look at is the history that brought these countries to this point of human development clarity. We, in Africa have not yet seen the kind of wars most Europeans have undergone in the past. We have a some ways to go before we collectively get “angry” enough to do something about our current condition.

The fact that politics is objectified as a game is interesting since those Have-nots are the field on which the elephants “play” on. The fact that it is sold like that is the work of the Media, the “Fourth” Estate. Estate of what?

So for us to have systems that allow the general population to control who has access to his or her data on any level, health included, is going to be fought by whatever 1% overlords the populace has.

But we are not clear, ideologically, on WHY we want the freedom to control our individual data. Privacy is not the issue. That is a red herring. 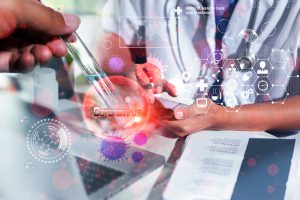 What the Pandemic Means for Technology Acceleration