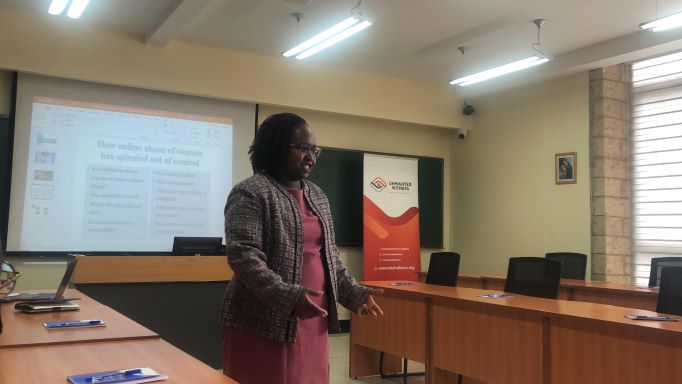 KICTANet Conducts a Masterclass on Gender and Data

By Angela Minayo and Neema Mujesia

On 2nd November 2022, KICTANet in collaboration with Unwanted Witnesses conducted a Masterclass on Utilizing data while safeguarding women’s safety online during the 4th Privacy Symposium in Africa. The activity was part of the DW Akademie’s women@web project which aims to ensure women’s safety online in the region.

Rosemary Kimwatu, a KICTANet Trustee, started off by asking participants why they think Online Gender Based Violence(OGBV) is prevalent in the country. She fronted possible drivers of OGBV such as cultural contexts, actions of the end users, lack of legal and policy responses from the government and various stakeholders, and actions /omissions of the social media platforms. She challenged the participants to find ways to create a culture that complies with the data protection framework and in the long run ensures women’s safety on digital platforms.

Cynthia Chepkemoi, linked OGBV and gender by first defining gender as social norms of what it means to be a man or a woman. She pointed out that gender does not only apply to women but also to men. Gender’s nexus to OGBV can be traced to the fact that women and sexual minorities are the primary target of OGBV. Highlighted the goals of the perpetrators of OGBV and the harms of OGBV. For instance, she stated that 75% of women interviewed have suffered from mental stress and anxiety due to OGBV. She pointed out some forms of OGBV.

Finally, on the way forward, Rosemary Kimwatu, called on participants to advocate for lawful utilisation of data by academia, law enforcement and the technical community. The participants were then awarded certificates for participation in the masterclass.

The themes on OGBV, its nexus to gender, forms and harms of OGBV are covered in module 5 of the Digital Enquirer Kit on OGBV, which was formally launched on 28th October 2022. Additionally, KICTANet has developed a policy brief on Data Protection and Privacy from a Gender Perspective, comic strips on women’s safety online and women’s data protection and trends on online violence against women in politics in Kenya.