It is not clear if any of the media houses has taken legal action.
However, the media attended a press briefing this afternoon where they
were informed that the stations would “remain off air until the
government has completed investigations into the “swearing-in” of
Opposition leader Raila Odinga.”

Has any media station gone to court on this?

Or are they perhaps pursuing ADR methods to resolve the issue?

Advocate of the High Court of Kenya,Commissioner for Oaths & Notary
Public

Actually, Ali am equally outraged that am not seeing sufficient,
copiou, outpouring amounts of outrage from the mainstream media, or we
being hoodwinked..?

We seem to be the ones who look more outraged at this, strangely..!

“Discovery consists in seeing what everyone else has seen and thinking
what no one else has thought”. ~ Albert Szent-Györgyi

Sent from my iPad

Peter. I hope you wrote us this email while in a highly charged
meeting with your colleagues and those from the other houses as
regards to how you are going to march to both the CA and the MoICT to
demand the restoration of your transmissions and an explanation.

You just tell me where and when we are to start.

If not, I have no sympathy for you guys.

My conundrum for the day.

I work for KTN NEWS
I had scheduled two interviews today afternoon.

One on modern commercial large scale farming and another on T-vet
(Technical and Vocational Education and Training) and youth.

Being off air on most platforms and under government shutdown, one of
my interviewees, parastatal Chief, no less, has developed cold feet
and cancelled or postponed. He is not sure how to behave and whether
his turning up would be misconstrued. (Two weeks of work out of the
window).

My second interviewee, a focused and passionate lady PS. we have been
planning and cancelling for 3 months now. When I last got her into
studio, what was supposed to be a one hour insightful discussion was
interrupted by a presidential rally by the current President. She got
just 3 minutes on TV for her trouble and left veeeery angry.

After much haggling, we finally rescheduled. AND THEN YESTERDAY
HAPPENED. Despite the switch off her handlers insist we keep our end
of the bargain.

If I host her, will I still be ‘kow towing’ to the same government
that is trying to literally throttle my bread and butter ( if I may
borrow from two expressions).

For both them and I, there is a lacuna on how to behave in these
instances.

And yet, my audience still needs to be educated and entertained. Oh
what interesting times we live in.

We are living a lie. The Channels are off. Who’s answerable? 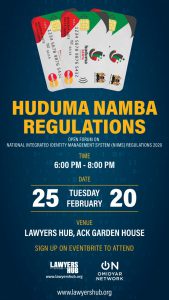 Event: Huduma Namba Discussions at the Lawyers Hub this evening